Humans has received an award for its active implementation of banking products in Uzbekistan. The company surpassed all its competitors in terms of the rate at which it issued Visa cards and the volume of transactions made therewith. Visa had previously already recognised Humans as a card issuing leader in the region.

Tashkent, Uzbekistan–(Newsfile Corp. – December 19, 2022) – Humans received the award for Best Fintech 2022 from Visa, the global digital payment industry leader. Every year, the international company presents awards to banks and fintech organisations that issue bank cards jointly with Visa. When selecting the winner in this category, Visa took into account the rate at which its bank cards are issued and the volume of transactions that are made using them in the region. According to the 2022 results, Humans has become the leader in this field in Uzbekistan. Humans VISA cards provide citizens of Uzbekistan with access to offline and online products anywhere in the world, and they are also increasing the volume of online payments that are made in the region.

“The proportion of non-cash payments that are being made in Uzbekistan is increasing, and we are doing our utmost to make the process of transitioning to new digital tools in the country as seamless as possible. Thanks to Humans, approximately one million citizens of Uzbekistan have already got access to Visa products, but we’re not planning on stopping there. The Best Fintech award is another reminder that we’re on the right path and that we’re dealing well with the goals that we set ourselves at the very start: giving citizens of Uzbekistan access to modern digital technologies. User-friendly banking products make life easier. They open up new possibilities, promote financial literacy, and give people mobility – with Humans VISA cards, our users have access to any product or service from anywhere in the world.” – Vlad Dobrynin, founder of the Humans Group.

According to data from Visa, the volume of electronic payments being made in Uzbekistan is steadily growing. In just the fourth quarter of 2021, they increased by a third. Humans VISA cards first started to be issued in August 2020 in partnership with Ravnaq-bank. Customers had access both to the virtual version and to the card in physical form. The virtual card can be acquired in the Humans app automatically when you connect a Humans SIM card. Customers can order a plastic card free of charge on the website and have it delivered to their home, or they can obtain one at a point of sale – Humans has already opened more than 1,100 service points in Uzbekistan. Humans VISA cards are accepted both in Uzbekistan and abroad.

“The collaboration between Humans and Visa in Uzbekistan has become something of a catalyst for the development of fintech in the country. More than two million people are already using Humans services, and that figure is continuing to rise. We have only been able to achieve that result thanks to our in-depth product expertise and understanding of the needs of our target audience. Humans has been working in Uzbekistan’s market for more than two years, constantly refining our products in order to make them even more accessible and user-friendly. Our team’s experience and knowledge has allowed us to quickly and effectively implement Visa payment technologies in Uzbekistan. And, as the collaboration with Humans demonstrates, developers are enjoying even greater demand from their customers.” – Evgeniy Lesnyak, senior director of strategic partnerships and fintech in Ukraine, CIS countries, and Southeast Europe.

The payment system previously presented Humans with its Outstanding Growth in Issuing award, according to the 2021 results. In 2022, however, Humans surpassed all other banks and fintech companies in Uzbekistan according to the rate at which Visa cards are issued and the volume of transactions carried out therewith.

HUMANS.uz is a superapp that combines a fintech service, cellular services, and an online payment system with a cashback function. The group’s offices are located in the USA, Uzbekistan, Belarus, Poland, Singapore, and Germany. As of May 2022, the number of active users of Humans’ services amounted to 2 million people.

To view the source version of this press release, please visit https://www.newsfilecorp.com/release/148600 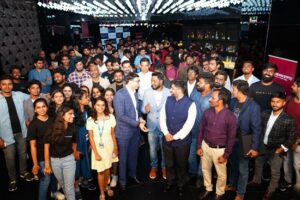 Source- Mordor IntelligenceHyderabad, Jan. 27, 2023 (GLOBE NEWSWIRE) -- The use of a tokenization solution, the concept of a surrogate...

New York, NY, Jan. 26, 2023 (GLOBE NEWSWIRE) -- With the development of the digital economy and the intensification of...

Tafabot Software LLC recently released the NeuralNet bot on January 2023. The bot is based on deep machine learning technology.DUBAI,...

CardLab and WiBioCard have combined their proprietary technologies to create a fully integrated card and backend authentication solution that aims...