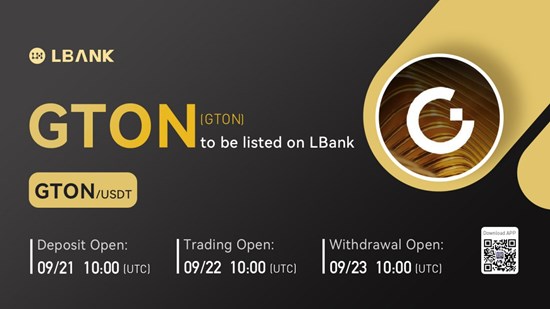 Based on the cutting-edge achievements of Web 3.0 technology, GTON Capital is building an infrastructure to advance digital capital markets enabling new generation of programmable economy. Its utility token GTON has been listed on LBank Exchange at 10:00 (UTC) on September 22, 2022, to further expand its global reach and help it achieve its vision.

GTON Network is a community-governed Ethereum rollup protocol. And as a native currency for GTON Network rollup, GTON Dollar (GCD) was built upon multi-collateralized stablecoin protocol with a real use case. Additionally, Treasury Protocols where GTON Bonds are the primary mechanism to establish the inflow of funds into the treasury will stimulate the growth of the network.

The three key components of the architecture are represented by smart contracts on the Ethereum network and a bridge system for ERC20 tokens and for the native rollup token GCD. The minting of the native stablecoin token occurs only in the GTON Network, and through the MNTR bridge, the stablecoin is made available on the Ethereum network as an ERC20 token.

The original blockchain of the GTON utility token is Ethereum, but the standard ERC20 bridge allows it to be transferred to the GTON Network. The protocol of the multi-collateral stablecoin GTON Dollar is deployed only in GTON Network. In order to mint GCD, it is necessary to bridge ERC20 tokens available as collateral to the GTON Network and lock them as CDP (collateralized debt position).

Different dApps can be deployed on the rollup, whose users will use GCD to pay transaction fees, the funds from which go to the sequencer and then to treasury and are further redistributed in the form of staking rewards for two types of stakers: GTON stakers (on the Ethereum network) and GCD stakers (on GTON Network).

As a foundation behind GTON Network, GTON Capital project creates capital-efficient technologies and products through synergizing the best elements of Web 3.0. The ultimate aim of GTON is to empower millions of users to invent and explore new experiences in decentralized digital capital markets. Business models, community structures, and collaborative creativity are being stitched together and redefined by GTON Capital to create a more sustainable, equitable, and efficient future for the global economy.

GTON Protocol has a dual token model represented by governance and utility token GTON and collateralized stablecoin GTON Dollar (GCD). Major protocol’s utility functions rely on GTON utility token and governance functionality. GTON Dollar stablecoin protocol uses GTON, ETH and other liquid assets as collateral with different collateralization ratio. Thus, GTON is not only a governance token of the GTON Dollar protocol, but is also used as collateral in it. Globally, GTON Protocol revenue is distributed among the stakers of both tokens, in the proportion determined by governance decisions of GTON holders.

The emission of GTON is capped at 21 million (i.e. 21,000,000) tokens and is deflationary, similar to BTC. Despite the fact that there is an allocation for staking and bonding in the protocol, it is limited and allows for the emission to only be used initially, as an extra incentive for onboarding into the protocol. In the long term, all staking rewards are taken from the funds that users of rollup and applications generate on it.

LBank is one of the top crypto exchanges, established in 2015. It offers specialized financial derivatives, expert asset management services, and safe crypto trading to its users. The platform holds over 7 million users from more than 210 regions across the world. LBank is a cutting-edge growing platform that ensures the integrity of users’ funds and aims to contribute the global adoption of cryptocurrencies.

To view the source version of this press release, please visit https://www.newsfilecorp.com/release/138147 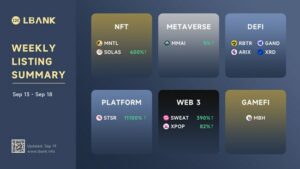 SADA bolsters payment model with acceptance of digital currencies, reducing barriers to entry for the Web3 community and emerging organizations...