OXFORD, United Kingdom, Dec. 21, 2022 (GLOBE NEWSWIRE) — Sophos, a global leader in innovating and delivering cybersecurity as a service, today revealed details of how it tracked down the likely culprit behind more than 20 fake criminal marketplaces designed to con cyberscammers in part three of Sophos’ series, “The Scammers Who Scam Scammers on Cybercrime Forums.” After stumbling upon a surface website mimicking the real criminal underground site Genesis, Sophos researchers further uncovered the 20 fake marketplaces dating back to August 2021. All of the fake sites appeared to be run by a scammer who uses the handle “waltcranston,” a likely riff on the television show “Breaking Bad.”

“While investigating this huge sub-economy of scammers scamming other scammers, we examined about 600 scams of varying types. Out of all the scams investigated, this operation stood out for its sheer scope and intricacy. The scammer advertises the fake marketplaces on Reddit and replicates not just Genesis, which was the first scam site we ran across, but numerous other prominent or defunct marketplaces, such as Benumb, UniCC, and PoisOn. While at a technical level these scam sites are not sophisticated, the scam operation has been highly successful. In fact, seven of these fake sites are still active, and, to date, the cryptocurrency wallets associated with the scams have received at least $132,000,” said Matt Wixey, senior threat researcher, Sophos.

All 20 of the fake sites followed a similar scheme. Criminals were offered a chance to activate an account on the fraudulent version of a dark web marketplace with $100. The criminals expected their $100 would be deposited in either Bitcoin or Monero, and they would receive activation credentials. However, as part of the scam, once the criminals paid, their account would never activate. 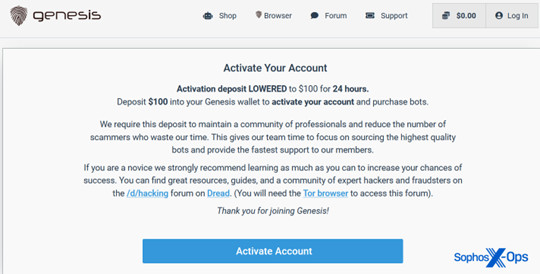 Sophos X-Ops: The deposit demand from the fake Genesis site

One common denominator among the 20 fake sites was a link to a website called darknet[.]markets—a site that lists dark web criminal marketplaces for visitors interested in drugs sales, carding, and cryptocurrency exchanges. This site ultimately led Sophos to a criminal forum called Café Dread—and a user going by the name of waltcranston.

“We started searching Dread for any mentions of the marketplaces mentioned on the darknet[.]markets, and we found multiple posts by the handle waltcranston talking about dark web marketplaces, as well as discussing how to scam people and recommending other users set up phishing sites. His own website, which sells meth, also shared some similarities with the fake marketplaces. We even found posts by Dread users who fell for the scam websites, and accusations by a Dread user that waltcranston was the culprit behind the scheme. While we can’t be 100% certain that those behind the handle waltcranston are indeed the culprits, there is strong circumstantial evidence. The entire operation and our investigation is an example of how much rich intelligence there is about cybercriminals hidden in these scams against other scammers, which the security community can leverage to help develop stronger defenses,” said Wixey.

Read more about these 20 fake marketplaces in Scammers Scamming Scammers Part 3 on Sophos.com.

About Sophos
Sophos is a worldwide leader and innovator of advanced cybersecurity solutions, including Managed Detection and Response (MDR) and incident response services and a broad portfolio of endpoint, network, email, and cloud security technologies that help organizations defeat cyberattacks. As one of the largest pure-play cybersecurity providers, Sophos defends more than 500,000 organizations and more than 100 million users globally from active adversaries, ransomware, phishing, malware, and more. Sophos’ services and products connect through its cloud-based Sophos Central management console and are powered by Sophos X-Ops, the company’s cross-domain threat intelligence unit. Sophos X-Ops intelligence optimizes the entire Sophos Adaptive Cybersecurity Ecosystem, which includes a centralized data lake that leverages a rich set of open APIs available to customers, partners, developers, and other cybersecurity and information technology vendors. Sophos provides cybersecurity-as-a-service to organizations needing fully-managed, turnkey security solutions. Customers can also manage their cybersecurity directly with Sophos’ security operations platform or use a hybrid approach by supplementing their in-house teams with Sophos’ services, including threat hunting and remediation. Sophos sells through reseller partners and managed service providers (MSPs) worldwide. Sophos is headquartered in Oxford, U.K. More information is available at www.sophos.com.

Photos accompanying this announcement are available at

Gryphon Digital Mining, a privately held bitcoin mining company, to merge with Akerna in an all-stock transaction that will advance Gryphon’s leading...

Summary: True Forex Funds introduces itself as a propriety trading firm. Recently, the company has initiated to implement new strategies...