Tallinn, Estonia, Aug. 29, 2022 (GLOBE NEWSWIRE) — There is no doubt that Web3 games have recently lost popularity among both players and speculators, despite the huge interest in mid-2021. Inadequately addressed problems, such as poor gameplay and unsustainable economics, have led native tokens to their all-time-lows. The whole blockchain gaming trend cannot be downplayed because of the failures of the pioneers. After all, in every industry or branch at some point the pioneers are replaced by second-wave companies. A good example of the replacement cycle is provided by technology giants such as Google and Netflix, which learned from the mistakes of their predecessors and built top positions on their ashes.

StarHeroes is a top-quality third-person space shooter which offers the player dynamic space combat in multiplayer mode. Simply put, it can be described as Counter Strike in space. The game already has a working alpha version and a group of 60 testers, who constantly provide the developers with valuable feedback that is reflected in subsequent iterations. The creation of StarHeroes was accompanied by an in-depth research of the Web3 game market. As a result, the game not only does not repeat the mistakes of its predecessor, but sets a whole new standard in the market.

The game has been in development for two and a half years, and the team currently consists of more than 40 specialists from around the world. Some of the StarHeroes team members gained experience at top gaming studios, such as CD Projekt RED, whose leading productions include The Witcher 3 and Cyberpunk 2077. The team also has experience in building blockchain protocols, as they previously co-created projects such as StarGate, Layer Zero and StarTerra. StarHeroes’ tokenomics, meanwhile, were designed by a multidisciplinary team of experts in the cryptocurrency market, economics and gaming industry.

The great potential of StarHeroes has been recognized by market giants. StarHeres is one of the first Web3 games that received a grant from Microsoft, allowing it to use advanced technology in their gameplay. You can read more about it here.

It’s all about fun!

StarHeroes will combine two worlds, the worlds of traditional gaming and Web3. We have abandoned the pay2win model from the very beginning. At the core of our game is the competition in which only skill, teamwork and good communication count. This will allow players to feel real excitement, while at the same time enabling the adoption of blockchain in the world of gaming. Our main goal is to break the reluctance of players towards games related to cryptocurrencies and NFT by introducing StarHeros to the Free-to-Play segment.

The game will feature three different classes of spaceships, differing not only in appearance, but also in stats and weaponry. The player will earn experience points allowing to increase the level of his Hero and develop his features. Players will compete against each other on a level playing field, as it will not be possible to buy anything to facilitate gameplay. A key aspect of the game will be a competition and ranking system, similar to that of Counter Strike or League of Legends. The StarHeroes team has already announced a number of tournaments that will take place before the official release with the goal of promoting the title in the traditional gaming world. In addition to the ranking mode, there will also be an adventure mode. The latter is more about gaining experience and in-game earning. The adventure mode will serve as a kind of introduction to the ranking mode and the strong skill-based competition that comes with it.

The BattlePass and seasonal missions, the completion of which will provide the player with points redeemable for various rewards, will also be an important part of the gameplay. Importantly, even Free-to-Play players will be able to earn skins for ships in the form of NFTs or STAR tokens. As a result, they will gain the opportunity to seamlessly enter the world of cryptocurrencies, but will leave the final choice in the hands of the player. The game will also allow all players to gain experience and develop their Heroes’ Development Tree, as well as earn the in-game currency – Gold, which will further enrich the gameplay.

The StarHeroes game will be officially released in the first quarter of 2023, but its potential has already been recognized by leading VCs and player guilds. With top-notch gameplay, balanced tokenomics and easy onboarding, StarHeroes has what it takes to lead the new wave. After all, it will give every player what they value most – a quality and immersive gaming experience. 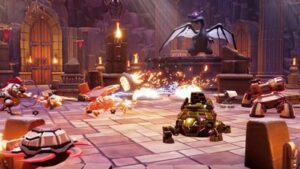 World Cup Inu develops the first token on ETH to support the World Cup achieving more than 50,000% growth in...

World of Farms, a Phenomenal Blockchain P2e Game Provides Innumerable Play and Earn Opportunities to Players Through Activities Like Guild...