Revenue was $211.2 million this fiscal year, a 212% increase from the prior year. Record net income of $79.6 million, up significantly from $24.1 million a year earlier. Basic income per share grew 191% to $1.02 from $0.35 during the prior year. Gross mining margin1 expanded to $163.9 million, from $51.1 million last year. Even with financings during the year and the acquisition and expansion of our New Brunswick facility, our growth in revenue and net income was accretive on a per share basis.

These great gains in our revenues and earnings are a result of the immense growth of HIVE during a key time in the evolution of cryptocurrency mining. HIVE grew from approximately 310 PH/s of Bitcoin mining and 2,700 GH/s of ETH mining as of March 31, 2021, to a milestone hashrate of 2 Exahash (or 2,000 PH/s) and approximately 6,100 GH/s of ETH mining in March 2022. This is a 545% growth in BTC mining hashrate and 225% growth in ETH mining hashrate year over year.

“Fiscal 2022 was an incredible year for HIVE. Despite the effects of COVID-19 such as global logistics and inflation we have achieved record results on a per share basis and continued to increase our Ethereum and Bitcoin mining capacity, without taking risks to stake our BTC or ETH to earn a yield on our assets,” said Frank Holmes, Executive Chairman of HIVE. Mr. Holmes added “We are also proud that during the year we were able to pay down our debt by over $5.5 million.”

The Company’s Consolidated Financial Statements and Management’s Discussion and Analysis (MD&A) thereon for the three months and year ended March 31, 2022 will be accessible on SEDAR at www.sedar.com under HIVE’s profile and on the Company’s website at www.HIVEblockchain.com.

For the fiscal year ended March 31, 2022, revenue was $211.2 million, an increase of approximately 212% from the prior year primarily due to an increase in the production of Ethereum and Bitcoin stemming from mining expansion.

Gross mining margin1 during the year was $163.9 million, or 78% of revenue, compared to $51.1 million, or 76% of revenue, in fiscal 2021. The improvement was primarily due to the acquisition and expansion of our New Brunswick Datacentre in April 2021 which has resulted in a significant increase in Bitcoin hashpower and Bitcoin rewards earned compared to the prior year. The Company’s gross mining margin from digital currency mining is partially dependent on external network factors including mining difficulty, the amount of digital currency rewards and fees it receives for mining, as well as the market price of digital currencies.

Net income during fiscal 2022 was $79.6 million, or $1.02 per share, compared to a net income of $24.1 million, or $0.35 per share, in fiscal 2021. The improvement was driven primarily by the improvement in gross mining margin1, higher Ethereum and Bitcoin prices, additional hashpower from our New Brunswick facility, gains on the sale of digital currencies, and foreign exchange.

(1) Non-IFRS measure. A reconciliation to its nearest IFRS measures is provided under “Reconciliations of Non-IFRS Financial Performance Measures” in the Company’s MD&A.
(2) Revaluation is calculated as the change in value (gain or loss) on the coin inventory. When coins are sold, the net difference between the proceeds and the carrying value of the digital currency (including the revaluation), is recorded as a gain (loss) on the sale of digital currencies.

It is important to reiterate that both of the foregoing restatements are non-cash charges and do not impact the Company’s ongoing operations, revenue from digital currency mining, equipment or other assets. Cash provided by operating activities and the Company’s positive operating results are not restated.

The Company has made changes to its internal controls, implemented additional checks and balances and will hire additional staff in the financial accounting department.

Details of the changes are fully described in Note 30 to the consolidated financial statements for the years ended March 31, 2022, and 2021.

Management will host a webcast on Wednesday, July 20, 2022 at 4:00 pm Eastern Time to discuss the Company’s financial results. Presenting on the webcast will be Frank Holmes, Executive Chairman, Aydin Kilic, President and COO and Darcy Daubaras, Chief Financial Officer. Click here to register for the webcast.

HIVE Blockchain Technologies Ltd. went public in 2017 as the first cryptocurrency mining company with a green energy and ESG strategy.

HIVE is a growth-oriented technology stock in the emergent blockchain industry. As a company whose shares trade on a major stock exchanges, we are building a bridge between the digital currency and blockchain sector and traditional capital markets. HIVE owns state-of-the-art, green energy-powered data centre facilities in Canada, Sweden, and Iceland, where we source green energy to mine on the cloud and generate rewards of both Ethereum and Bitcoin. Since the beginning of 2021, HIVE has held in secure storage the majority of its ETH and BTC coin mining rewards. Our shares provide investors with exposure to the operating margins of digital currency mining, as well as a portfolio of cryptocurrencies such as ETH and BTC. Because HIVE also owns hard assets such as data centers and advanced multi-use servers, we believe our shares offer investors an attractive way to gain exposure to the cryptocurrency space.

We encourage you to visit HIVE’s YouTube channel here to learn more about HIVE.

Except for the statements of historical fact, this news release contains “forward-looking information” within the meaning of the applicable Canadian securities legislation that is based on expectations, estimates and projections as at the date of this news release. “Forward-looking information” in this news release includes information about enhancement of the Company’s operations and sustainable future profitability; potential further improvements to the profitability and efficiency across mining operations by optimizing cryptocurrency mining output, continuing to lower direct mining operations cost structure, and maximizing existing electrical and infrastructure capacity including with new mining equipment in existing facilities; continued adoption of Ethereum and Bitcoin globally; the potential for the Company’s long term growth including the Company’s ability to continue to successfully mine digital currency; the business goals and objectives of the Company; statements regarding the impact of the restatement of the Company’s financial statements; and other forward-looking information includes but is not limited to information concerning the intentions, plans and future actions of the parties to the transactions described herein and the terms thereon.

Any statements that involve discussions with respect to predictions, expectations, beliefs, plans, projections, objectives, assumptions, future events or performance (often but not always using phrases such as “expects”, or “does not expect”, “is expected”, “anticipates” or “does not anticipate”, “plans”, “budget”, “scheduled”, “forecasts”, “estimates”, “believes” or “intends” or variations of such words and phrases or stating that certain actions, events or results “may” or “could”, “would”, “might” or “will” be taken to occur or be achieved) are not statements of historical fact and may be forward-looking information and are intended to identify forward-looking information.

Factors that could cause actual results to differ materially from those described in such forward-looking information include, but are not limited to, the efficiencies obtained through enhancements may not lead to operational advantages or profitability; further improvements to the profitability and efficiency may not be realized as currently anticipated, or at all; the digital currency market; the Company’s ability to successfully mine digital currency; the Company may not be able to profitably liquidate its current digital currency inventory, or at all; a decline in digital currency prices may have a significant negative impact on the Company’s operations; the volatility of digital currency prices; the risk that additional information may arise subsequent to the filing of the restatement of the Company’s financial statements; the adoption or expansion of any regulation or law that will prevent the Company from operating its business, or make it more costly to do so; and other related risks as more fully set out in the Annual Information Form of the Company for the twelve-month period ended March 31, 2022 dated and other documents disclosed under the Company’s filings at www.sedar.com www.sedar.com and www.sec.gov/EDGAR.

This news release also contains “financial outlook” in the form of gross mining margins, which is intended to provide additional information only and may not be an appropriate or accurate prediction of future performance, and should not be used as such. The gross mining margins disclosed in this news release are based on the assumptions disclosed in this news release and the Company’s Management Discussion and Analysis for the fiscal year ended March 31, 2022, which assumptions are based upon management’s best estimates but are inherently speculative and there is no guarantee that such assumptions and estimates will prove to be correct. 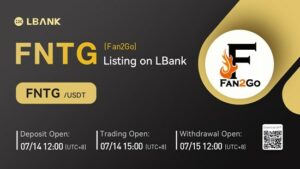 Meta ETH, a token based on the second largest cryptocurrency ETH is launched as a highly unique BSC rewards tokenLondon,...

Thonic, the audited platform that gives you access to financial grade research on alt coins, has officially launched its presale....

Calgary, Alberta--(Newsfile Corp. - August 17, 2022) - Antelope, a community-run blockchain protocol, has announced its decision to fork from...

“Deepening digital literacy and the consequent increase in smartphone ownership has prompted consumers to rely on mobile payment technologies. Furthermore,...

OKX has released a video ‘celebrating the HODLers’With more users HODLing their crypto than liquidated during previous bear markets, OKX...