SAN FRANCISCO, June 2, 2022 /PRNewswire/ — Blockchain Coinvestors, a leading blockchain venture fund of funds and coinvestment program with a combined portfolio of more than 400 blockchain enterprises and projects, including approximately 50% of the blockchain unicorns, today announced that its Fund I has been ranked in the top decile for performance in Q4 2021 in its category by PitchBook.

“Almost a decade ago we decided to focus on blockchain companies and projects because we knew that digital monies, commodities and assets are an inevitability, and that like the Internet, they represent a true global horizontal innovation,” said Alison Davis Chairman and Managing Partner. “We, and the funds we back, know that it is the blockchain and crypto entrepreneurs who are the central actors of this global movement and we are proud to be backing them with capital and value added.”

“Today we are excited to be investors in more than 45 leading blockchain funds in North America, Europe and Asia, and we thank them for their exceptional returns which have made our own fund the highest performing in its category,” said Matthew Le Merle, CEO and Managing Partner of Blockchain Coinvestors.

About Blockchain Coinvestors Launched in 2014, our goal is to provide broad coverage of the emerging unicorns and fastest growth blockchain companies and crypto projects. The strategy is now in its 9th year and has to date invested in more than 40 pure play blockchain venture funds in the Americas, Asia and Europe; and in a combined portfolio of 400+ blockchain and crypto projects including approximately 50% of all blockchain unicorns. Our funds rank in the top decile amongst all funds in their respective categories on both PitchBook and Preqin. Headquartered in San Francisco with a presence in Grand Cayman, London, New York, Zug and Zurich, the alternative investment management firm was co-founded by Alison Davis and Matthew Le Merle. 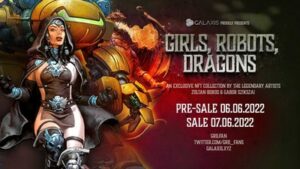 Previous post In partnership with Galaxis, Sci-Fi artists of Magic The Gathering & Dungeons and Dragons are to release their very own Sci-Fi Fantasy NFT!